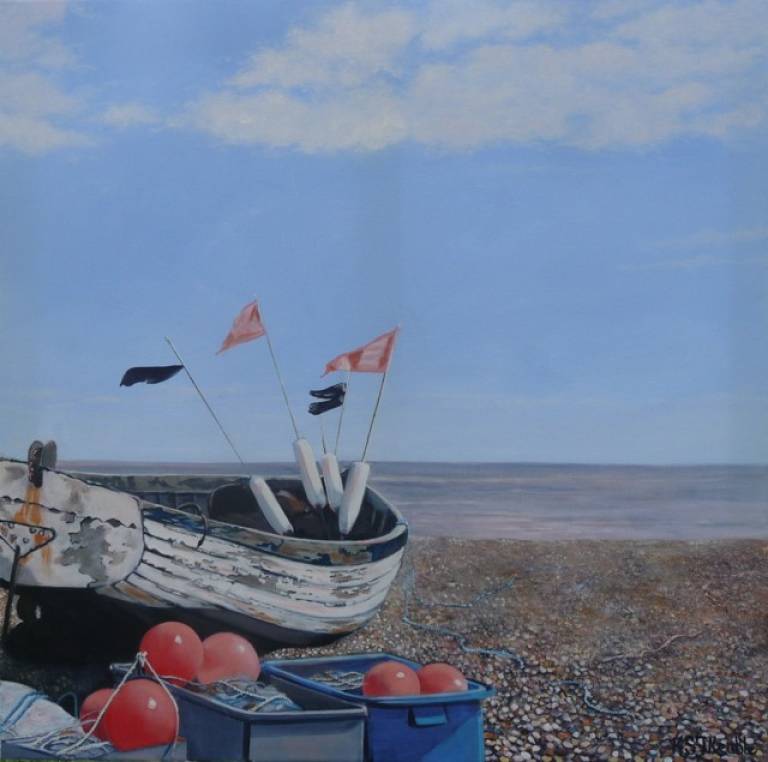 Karen was born in Great Yarmouth, Norfolk in 1966, the

travelled the world living in Singapore, Bangkok, Australia and Norway.

During this time she developed her love of drawing and painting,

all of those great places, gave me the opportunity to see new cultures,

On her return to Britain Karen studied Art in Aberdeen.  She moved to

Southwold seafront in 1999 and realized her natural ability to capture

the sea. She enjoyed limitless views of the beach, the groynes, the sea,

birds, people, beach huts and of course the waves crashing onto the

In 2004 two of her paintings were selected for a permanent art collection in the Palace of Westminster.

Karen purchased the Southwold Gallery in 2005, ‘So now not only

was I in charge of my own destiny, but I had the opportunity to help

able to support emerging artists as I was supported.’ The gallery exhibits over 40 local artists and has thousands of loyal customers.

In 2008, she was approached by Dorling Kindersley to write and

months of painting, writing and having her work photographed in a step

by step process, the book was published in 15 different languages and

received a number of 5 star reviews.

Southwold. In Norwich, her studio is surrounded by parkland and

wildlife. ‘This setting is perfect for tranquil painting time although my heart belongs by the sea.’

‘Inspiration for my paintings comes from the amazing Norfolk and

Suffolk scenery, which I see every day: The dramatic sky, light

on a beach. Everyday things just lying around, that when the light hits

them look amazing. An inspirational sky for me conjures up all sorts of

come. That particular feeling I portray in my painting creating a drama

which the viewer interprets in a personal way to them. Painting is a

Karen’s paintings are in private collections in Britain, Europe,

Malaysia, Australia and America, including two paintings held in the

House of Lords Art Collection. Her work is on permanent exhibition at